If you want to move a pen (or a CNC tool, or a 3D printing hot end) in the X and Y plane, your choices are typically pretty simple. Many machines use a simple cartesian XY motion using two motors and some sort of linear drive. There’s also the core-XY arrangement where two motors move belts that cause the head to travel in two directions. Delta printers use yet another arrangement, but one of the stranger methods we’ve seen is the dual disk polar printer which — as its name implies — uses two rotating disks.

The unique mechanism uses one motor to rotate a disk and another motor to rotate the entire assembly. The print head — in this case a pencil — stays stationary. as you can see in the video below.

We enjoyed [heinz’s] write up and that he cited his influences. There’s the Theta printer. There was also a proposal on the RepRap forum back in 2006. But this plotter is his.

We’ve often thought of using a rotary Z axis for 3D printing, although that would take some approximation math since each layer would really be a spiral depending on where you were in the rotation. However, that doesn’t help you if you wanted to make a plotter or other flat machine like a laser engraver. This setup would work for those cases, but we aren’t sure if there is any real benefit compared to existing schemes. Except that it looks cool in motion.

If you want to learn more about core-XY, we’ve got some reading for you. The Theta printer was part of one of our contests, so you can read more about it, too. 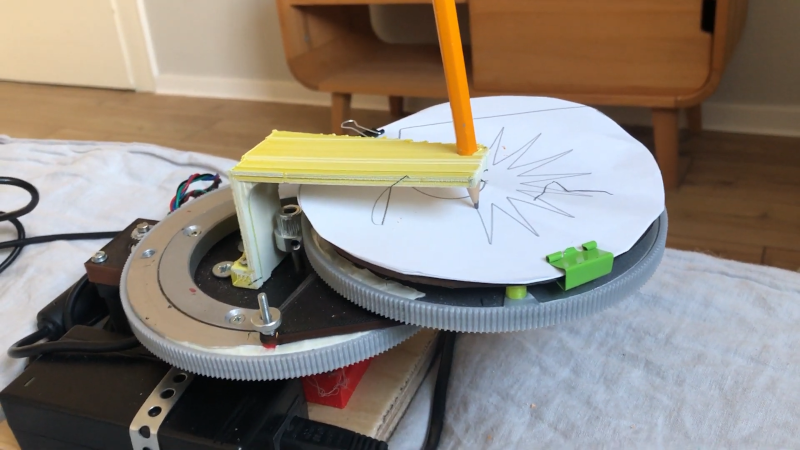